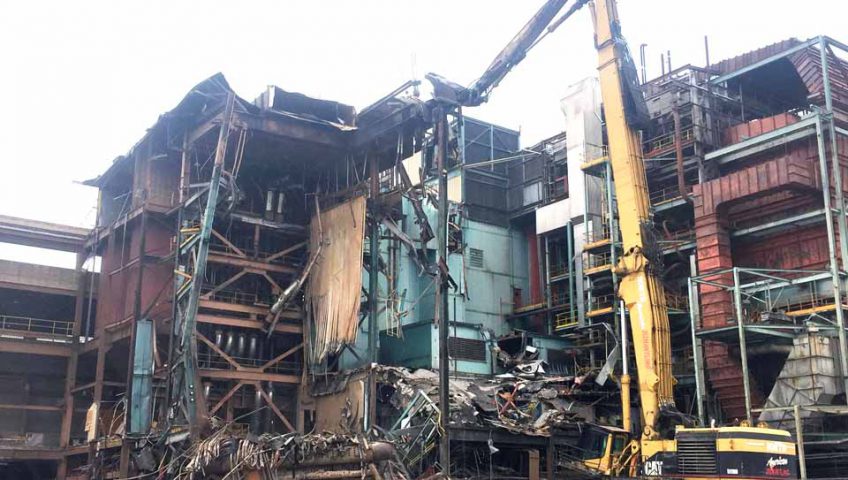 In May of 2015 North American Dismantling began the decommission and demolition of the Arapahoe power plant located in Denver. Xcel Energy with contracted North American Dismantling (NADC) to complete the total dismantlement of the entire Arapahoe power plant consisting of 65 structures, some reaching heights of 6 stories, and a total of 199,577 s.f. located on 50 acres.

In June of 2015 asbestos abatement of insulation and other material as well as lead paint removal was completed leading up environmental cleaning of chemicals, oils, and other contaminates in October of that year. Various storage vessels were emptied, cleaned, and disposed of during this environmental work.

In March of 2016 NADC began actual demolition work on the plant. Consisting of a total of four power-generating units with a peak height of 105 feet, ranging from 50-100 Megawatts equaling a massive 130,000 s.f. NADC demolished all the structures which included the power-generating units, various outbuildings including warehouses, shops, and storage buildings, foundation removal of structures, circulating water tunnels, all underground well & piping systems, Utility disconnects, coal conveyer demolition and employing conventional methods to demolish two of the plant’s concrete smoke stacks was part of this phase of the work.

The most challenging part of this project was the concrete removal. Between cooling tower basins, foundations, and circulating water tunnels, NADC removed, crushed and recycled approximately 24,000 yards of concrete. NADC successfully completed the over two-year project with zero recordable incidents, accidents, or injuries.

The demolition of the Xcel Arapahoe Power Plant took a total of 25 months to complete. with extensive abatement, environmental cleaning, and precise demolition work, North American Dismantling (NADC) was able to complete the project on time and on budget. A once expansive powerplant now sits as a 50-acre greenfield lot, restored to its natural beauty in Denver, Colorado.