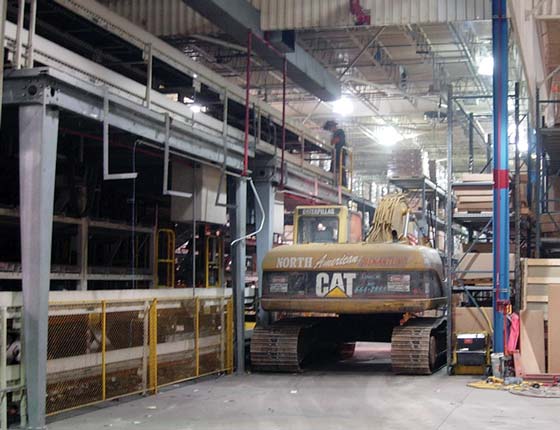 Work Performed: Strip Out and Demolition of Paint Shops and Process Equipment

Over the years the plant went through many changes without any prior removals. The United States Navy and the Hudson Motor Car Company constructed the facility in 1941 for the manufacturing of various types of artillery and shells. The facility was subsequently owned by Westinghouse and Ford Motor Company, before it was purchased by the Chevrolet Motor Division of General Motors in 1961. From 1961 to 1974, the facility was used to manufacture automotive parts and artillery shells. From 1974 to July 1980, Chevrolet continued automotive manufacturing operations. The Hydra-Matic division of General Motors began operations in 1980 and continues to produce transmissions and various other automotive parts to this day.

It was the task of North American Dismantling to finally clear out all the old and redundant systems that had been collected over the years, including electrical, mechanical, fire protection, heating and ventilating, and security systems. There were absolutely no as built drawings available to assist North American Dismantling in this endeavor. Several of hundreds of hours were spent identifying and labeling the systems that were to remain and those that were to be removed.

All abandoned pipes, conduits, wires were removed from the inside and below the roof truss of the buildings. Conveyors, mezzanines, catwalks, and their supports that were no longer in use were removed completely. All equipment support brackets were removed. Steel
brackets and clamps for pipes and conduits were removed from roof trusses and building columns in the identified dismantling area. North

North American Dismantling also removed several hundred feet of 48” round duct work, which covered an area of approximately 200,000 sf from the existing roof.

North American Dismantling completed the asbestos abatement of pipes, heater units and HVAC units located in the truss of the buildings.

North American Dismantling also completed the environmental cleaning of all pits, sumps, flooring and trenches in all areas.

In addition to our original contract work, North American Dismantling was awarded the removal of approximately 12,000 sf of existing oven from the roof area. The ovens were contaminated with non-friable ACM. In Addition, North American Dismantling received the proper 40 hr training that was needed to remove the ovens. The roof, roof panels, and side panels of the Elpo Oven were double wrapped with 6-mil poly and disposed of as ACM. The remainder of the oven was removed as non-hazardous metal and debris. Because of the high flammability of the roof, North American Dismantling, in conjunction with the Plant Fire Marshall, purchased four plasma cutters and trained its employees to complete these operations.