This project included complete removal of all structures to the back of curbs surrounded by Fremont, 1st, Ogden, and Main Streets. All structures were removed completely to their foundations and the North Tower basement was backfilled with crushed concrete from the demolition and compacted to 98% of proctor.

The first structures to be removed were the lower one and two-story structures including Granite Gaming, Mermaids, Golden Goose/Glitter Gulch, the Power House, and Low Roof Annex sections of the Towers. The Power House and Mermaids had basements. Next, the casinos were taken down. The old casino section had a basement as well and while backfill was not required, we graded these areas for easy movement around the site. We needed to build a workbench for the high reach equipment to access the towers, so the concrete parking structure came next. As the structure came down, the materials were segregated and sized for use in constructing the workbench.

The concrete south tower was demolished and the materials were segregated and sized to make a 35′ high workbench for accessing the north tower. This structure was a steel-framed, staggered truss system that allowed 80′ spans column to column in the N-S axis. The tower was 80′ across, 145′ long and 200′ in elevation. The high reach equipment began by removing the roof, penthouse, and four stories of floors between the column lines. Once exposed, a crane was used with a man basket to carry workers to planned elevations for torch cutting and felling. This process continued from East to West, bay by bay, until the stairwell at the West end was reached. The West end was felled in four separate felling events utilizing torch cuts and pull cables.

SAFETY GOALS ACCOMPLISHED: This project was completed without injury.

SPECIAL ACHIEVEMENTS: The North Tower with its steel frame and staggered truss system was a special challenge. the work plan was carried out flawlessly and safely.

ADDITIONAL COMMENTS: Dust control was a very important part of our work in Las Vegas due to being surrounded on all sides by a bustling crowd. The Clark County Department of Air Quality visited the project on several occasions. They were always complimentary of our efforts to control dust and did not issue a single warning or citation.

Contact us for more detailed information on your
total demolition project. 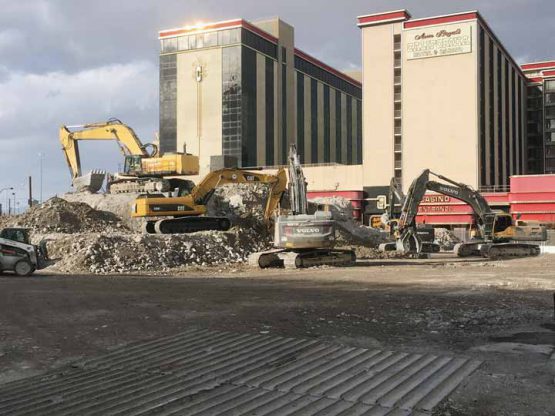 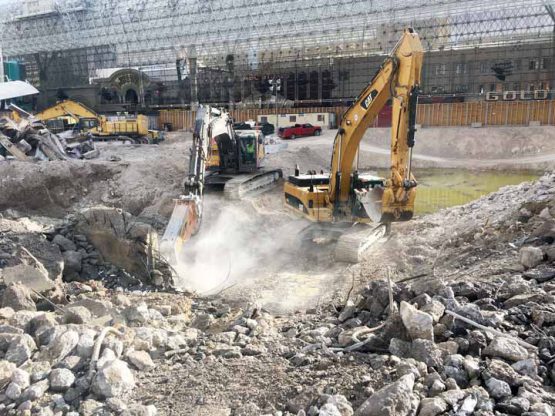